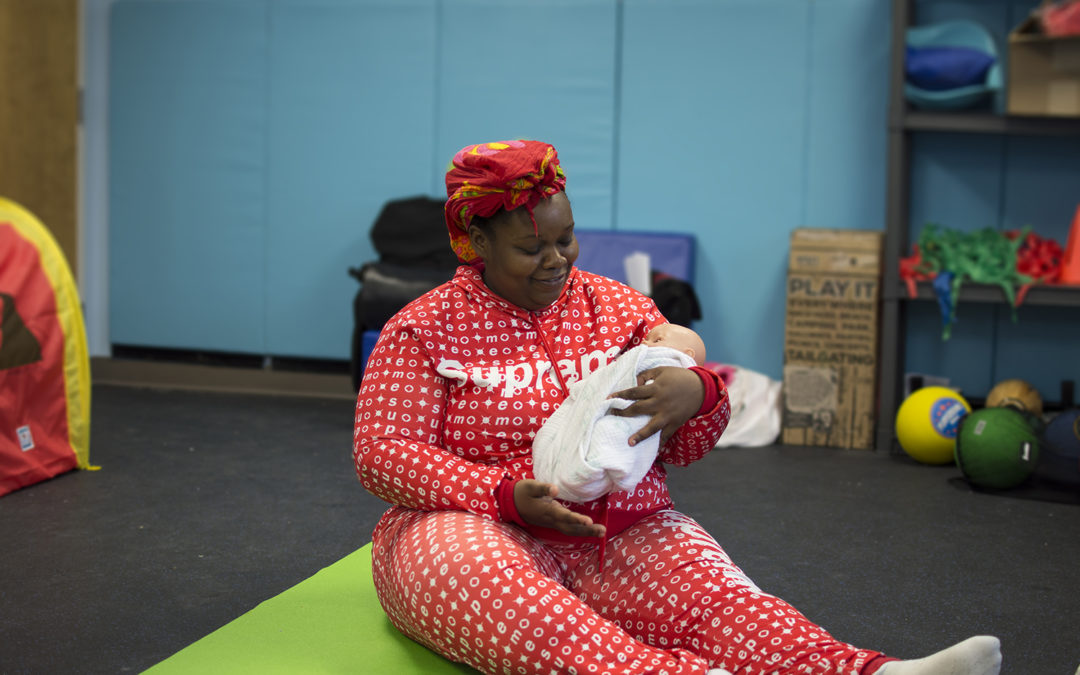 Last month, Community Services began offering prenatal classes thanks to the support of a mini-grant. The goal of these classes is to keep families together, support the mother and baby in a healthy pregnancy, help and empower families in decision making, and to educate and prepare parents for a new baby.

The classes take place at the Jefferson Career Exploration Center and are facilitated by Angel Kulczyk, a certified doula. Topics covered in the classes include how to create a birth plan, car seat safety, healthy relationships, breastfeeding and bottle feeding, yoga, deep breathing exercises, and more techniques to help expectant mothers.

Jaime, a class participant, is a first-time mom expecting a baby girl in August. She said the prenatal classes have helped her to prepare and get the supplies she needs. She is looking forward to welcoming the new baby.

“I can’t wait,” she said. “My family is throwing me a shower next month and they’re really excited.”

We are thrilled to be able to provide a program like this to help families. 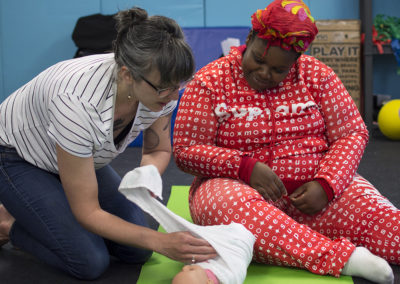 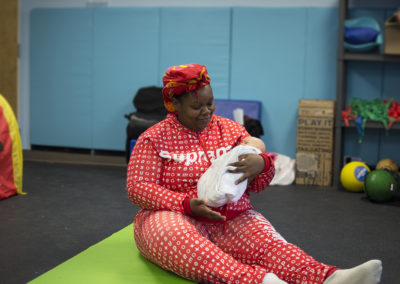 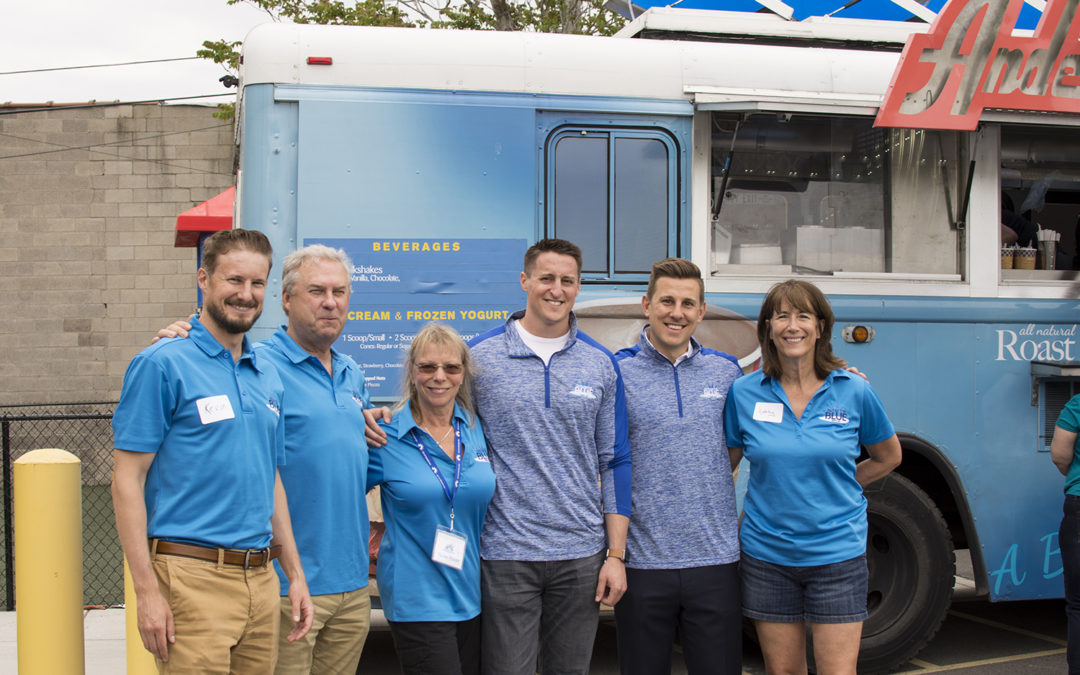 Out of the Blue dishes out cool treats

Out of the Blue dishes out cool treats

Recently, people we support got a sweet treat thanks to Out of the Blue WNY. Out of the Blue arranged for Anderson’s Food Truck to make a stop at our Jefferson Career Exploration Center and serve up some ice cream for people in our programs.

About 100 people had their choice of a variety of flavors, such as Graham Cracker Crunch and Mint Chocolate Chip, or they could order sundaes, milkshakes or frozen yogurt. Out of the Blue provided drinks as well. Despite a few rain showers, everyone had a great time eating their treats, catching up with friends and dancing to music. Thank you Out of the Blue for everything that you do for our agency and the people we support! 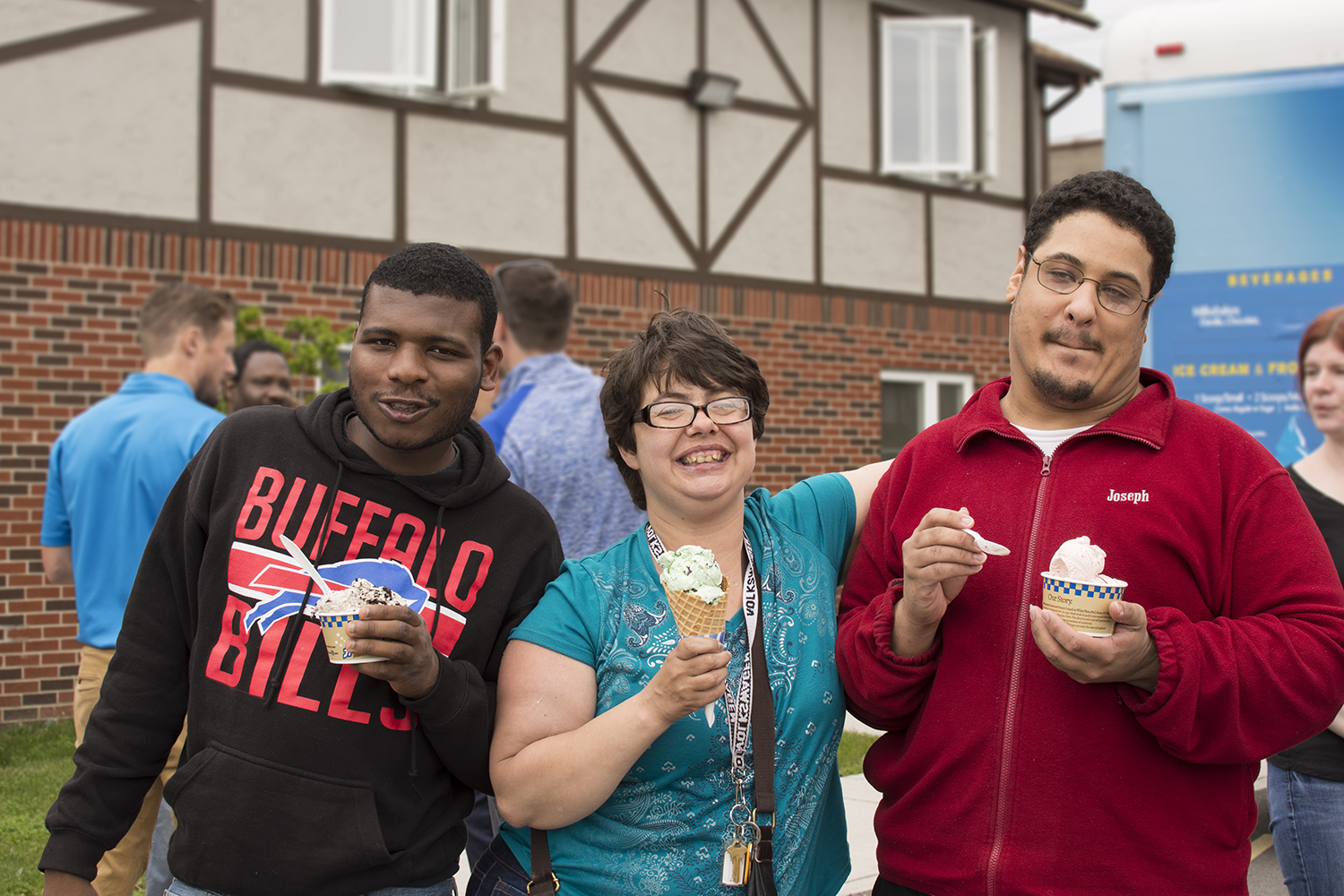 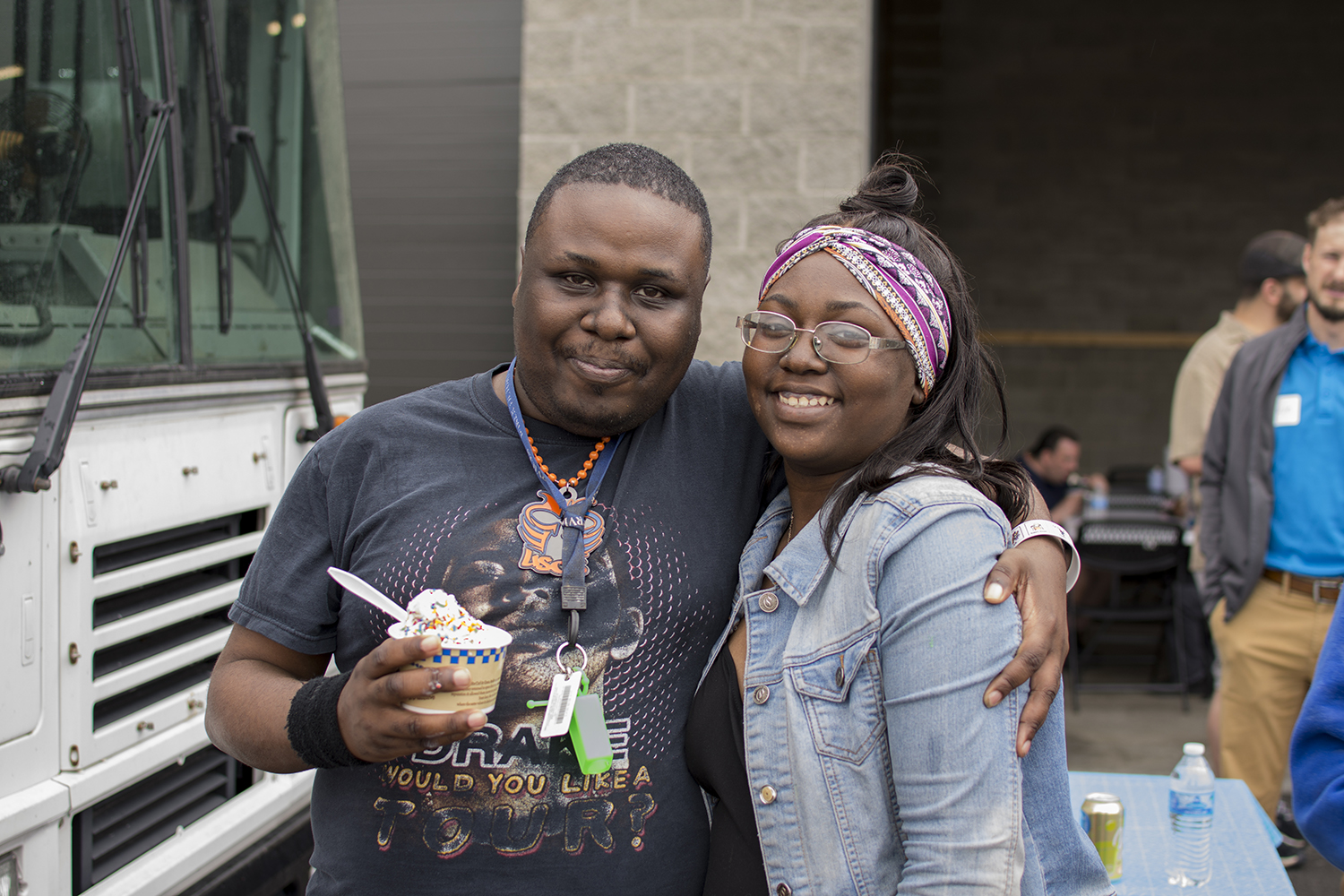 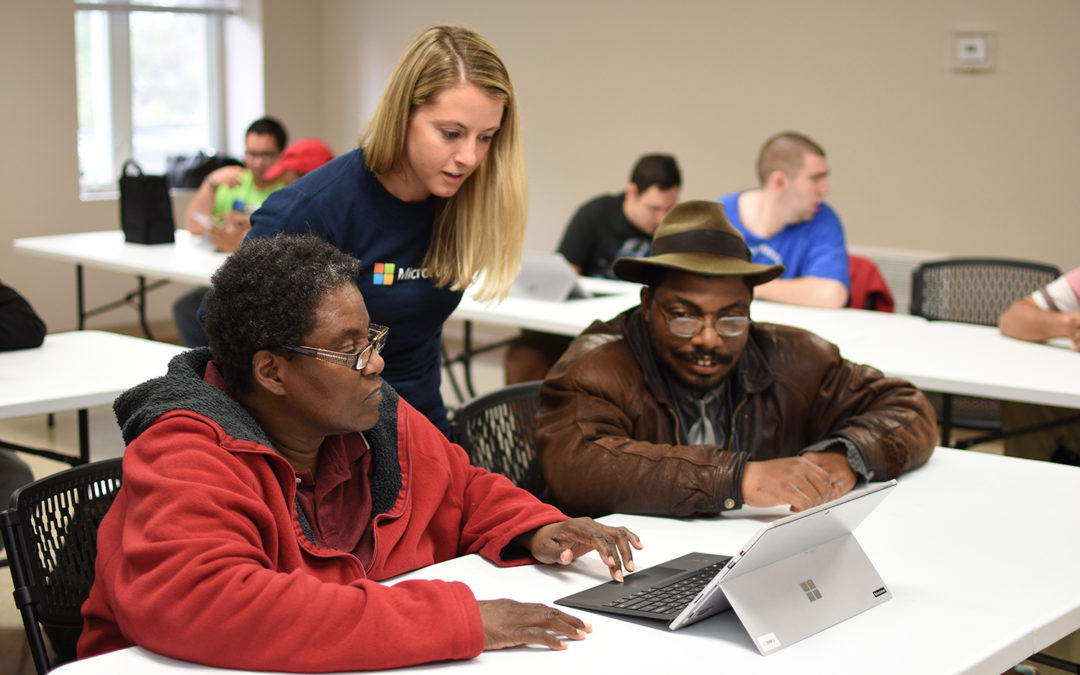 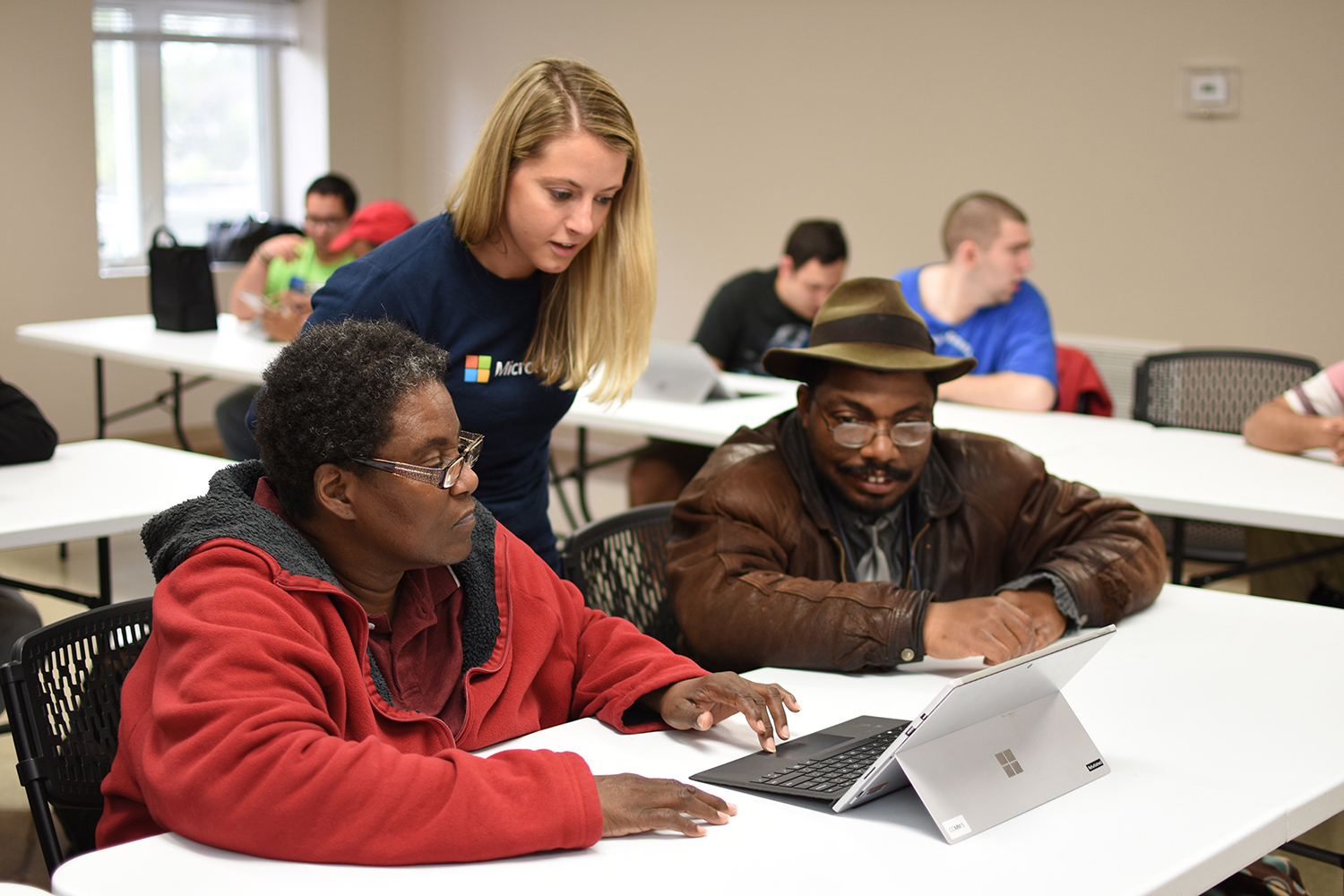 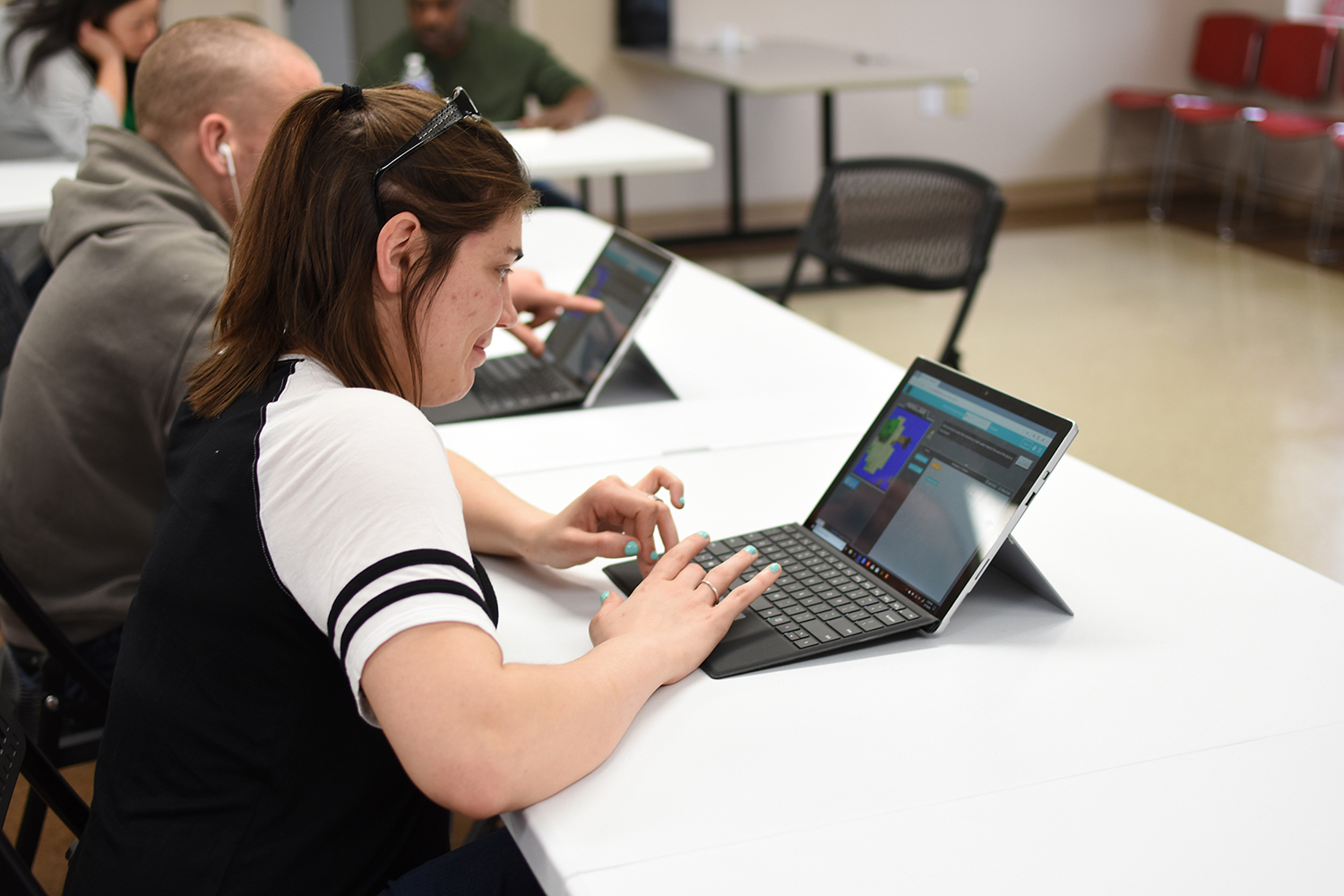 Microsoft recently partnered with Community Services to present a workshop for our Pre-Vocational programs and to host an accessibility presentation for the public last month.

Emily Rautenstrauch, Community Development Specialist at the local Microsoft Store, spoke to our Pre-Vocational programs about what it’s like to work for the company and the different types of jobs available. She explained some of the responsibilities of various positions and the qualities Microsoft looks for in an employee.

Afterward, Emily passed out several Microsoft laptops so everyone could play a game that helps teach coding techniques.

The following week, Microsoft held a free workshop for the community to discuss the tools available to support people with hearing, vision, mobility and learning disabilities. This included how to use tools in Windows 10 such as adjusting display settings, using a screen reading app, the Dictate setting in Word, customizing audio and more.

After the presentation, attendees had a chance to try out some of the tools on laptops, such as enabling the Dictate setting in Word. This tool allowed everyone to speak out loud and watch as the words appeared as text on the screen.

We look forward to providing more opportunities like this for the people we support and the community in the future! 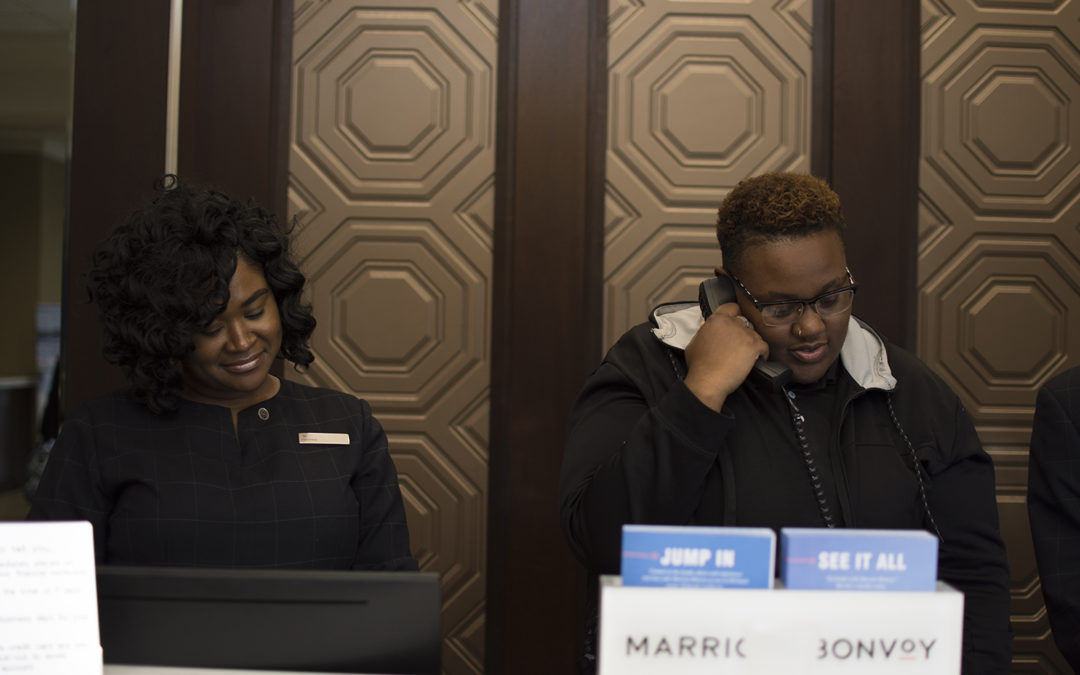 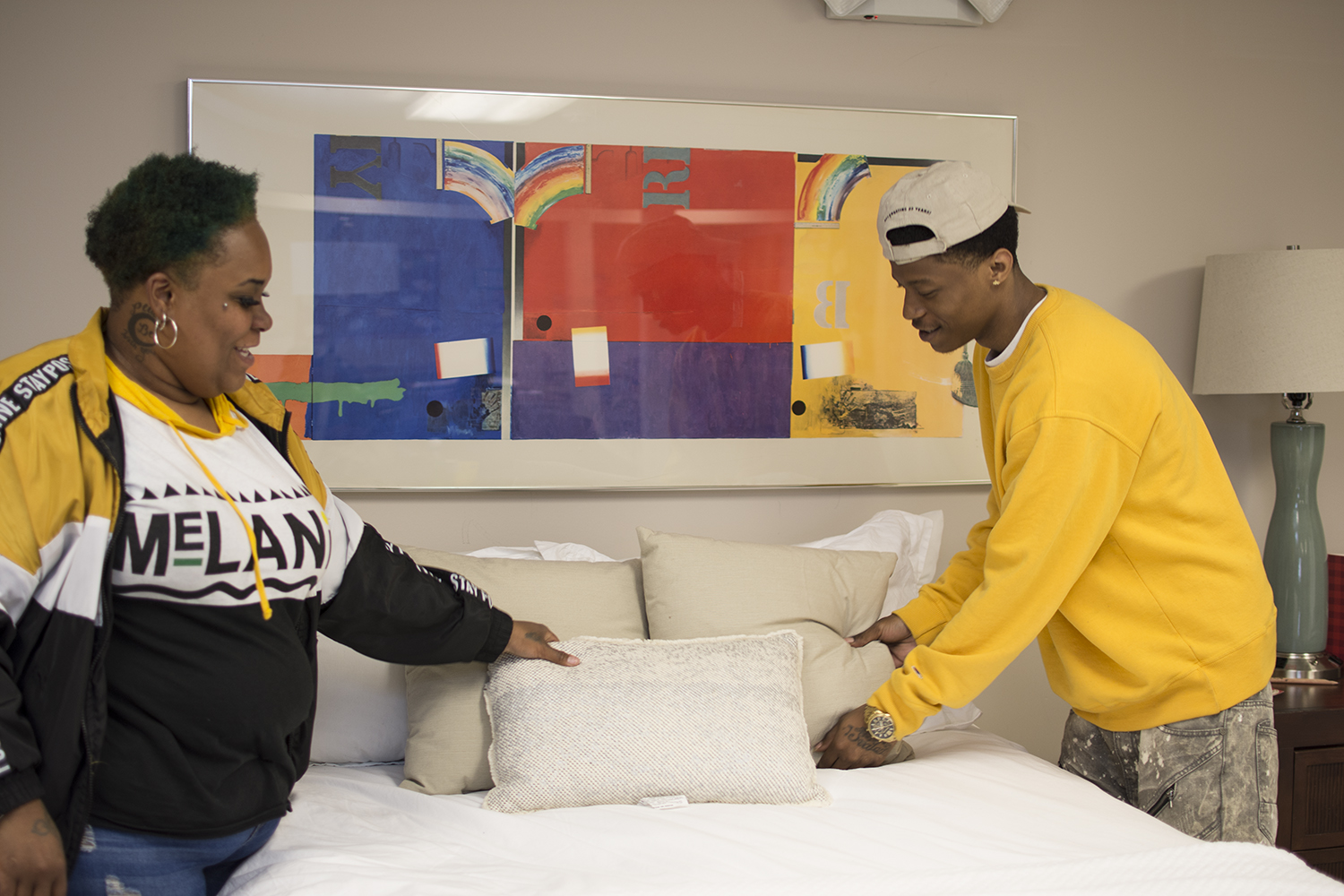 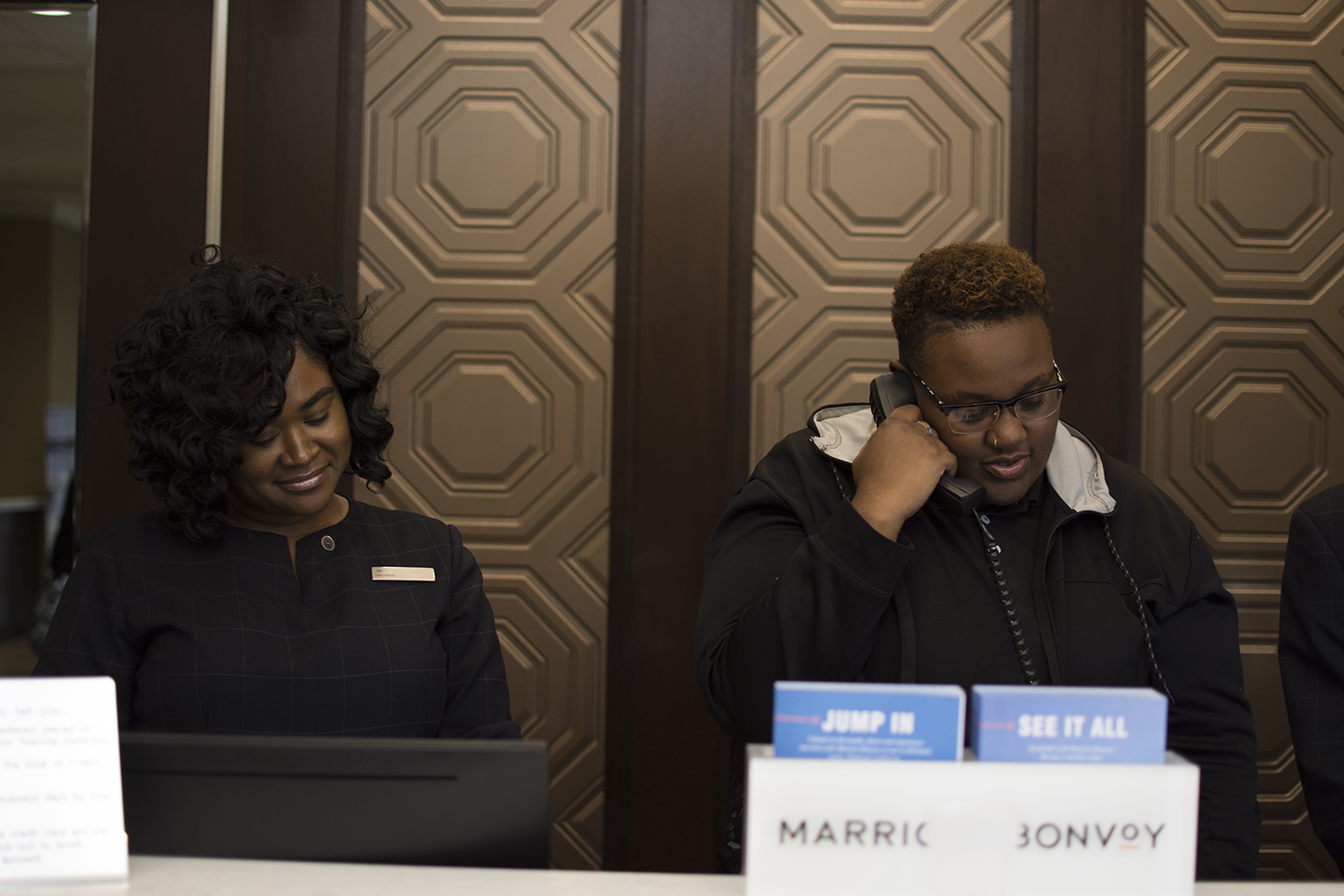 Our first hospitality training class graduated in June at our Jefferson Career Exploration Center. In partnership with The Service Collaborative of WNY Inc., we started our first cohort of classes in April with a small group of students to provide them with the opportunity to explore careers in the hospitality industry and develop the skills needed for specific jobs in that field.

The classes focus on two main areas of hospitality: housekeeping attendant and front desk representative. Classes are held four days a week at Jefferson and instructed by Joelle Amico, our Hospitality Workforce Development Specialist. A certified curriculum is used to guide the classes and teach students the fundamentals of the hospitality industry.

“The students who have signed up for these classes want to better themselves and want to explore the opportunities that are available to them,” Joelle said.

Over the duration of the course, students received hands-on practice in our mock hotel room at Jefferson, toured hotels in the Western New York area, and had the chance to job shadow professionals in the field.

A small graduation ceremony was held in June where students were presented with their certifications from the American Hotel & Lodging Association. We are thrilled that our first class passed their testing with flying colors and look forward to working with our next group of students! 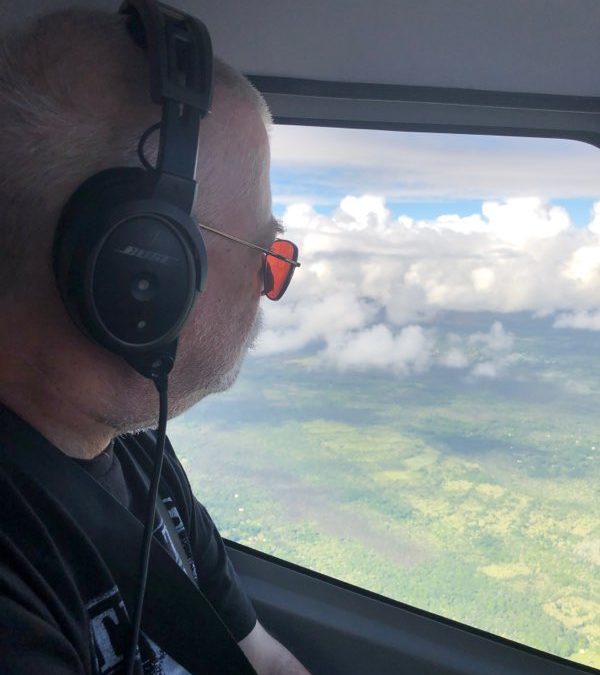 After nearly 10 years of planning, Paul finally walked into the warm, tropical air on the big island of Hawaii. Since 2009, Paul had wanted to make the trip, but circumstances had postponed it until he moved to his current home.

Desmond Handley, Process Improvement Specialist, said at the time Paul had an extensive behavior support plan and had to have staff with him at all times.

After working hard with his team, Paul and Desmond began planning the trip. They set off for Hawaii in late December of 2018.

As a big fan of the show Hawaii 5-0, one of Paul’s favorite parts of the trip was seeing the Iolani Palace, which serves as police headquarters in the show. He and Desmond visited Pearl Harbor as well. A boat took them around the USS Arizona, which is submerged in the water and still leaking oil from when it was first hit during the war. They also boarded the Battleship Missouri Memorial and see the surrender deck where World War II formally ended.

Paul also wanted to see the volcanoes, but due to a recent eruption, the state park was closed. So he booked a helicopter tour to fly over the volcano field. 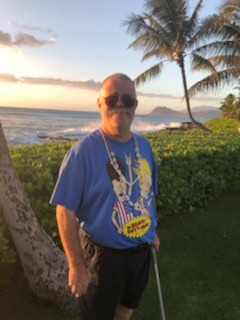 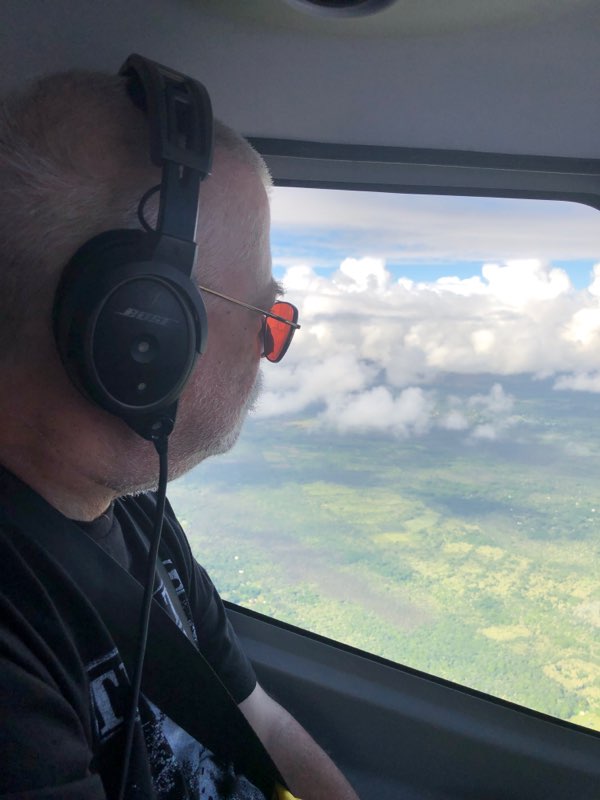